This year we once again sought to observe the times by using two instruments – a sundial in Southern Colorado USA and a nail board in Sydney Australia.  A number of measurements were taken on both instruments in the lead up to the Spring Equinox 2018.

One thing we can’t control is the weather and we also can’t control whether or not animals have knocked against our new metal dial.  This observation day we noticed an alignment problem with the dial and also have had rain in Sydney.

In 2017 a mark was placed on the side of the house in Southern Colorado around the time of the Spring Equinox as another baseline point of reference.  This was a sunlight marking on 19th March 2017.  It happened that one day later on the 20th March 2017 was the day of the turn as outlined in last years spring equinox witness. This year on 21st March 2018 the sunlight beam was around the same place.  This shows that the sun has gone full circle and returned to the same place – the only thing different is one calendar day on the Gregorian calendar. 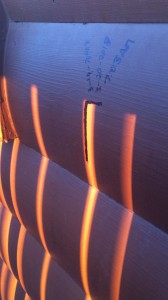 This is the sixth year now that we have measured the equinoxes, as best as we are able, learning each year.  We continue to share this information for the many that ask what we do.  We do not say “thus says YHWH”.

We have in our reckoning through various observations leading up to and including today, just completed a 365 day year.

We will now here in the Northern Hemisphere, start the count of the new biblical year – thus we will reckon Gregorian Calendar day of Wednesday 21st March 2018 as Day 1 of the first month.

Shabbat will be reckoned on the 7th day of this count – thus Gregorian Calendar Tuesday 27th March 2018 will be reckoned as the first shabbat of the new biblical year and then each subsequent Gregorian Tuesday will be the shabbat, according to the count of this method.

Pesach will be reckoned on the evening of the 14th day of the count thus Gregorian Tuesday 3rd April 2018 is when we will be celebrating Pesach.  The next day will be the 15th day of the first month, thus being the first day of unleavened bread, and so on.

So for those of us in Sydney as an example, the Gregorian Thursday 22nd March 2018 will be reckoned as Day 1 of the biblical year.  Shabbat will therefore follow on the 7th day as Wednesday 28th March 2018 and will occur each subsequent Wednesday.  Pesach on the 14th day of the first biblical month will therefore be on Gregorian Wednesday 4th April 2018 and so on.

We continue to encourage you to study and practice these matters for yourself and walk in the conviction that you have. The point is to be watching, observing and testing for yourself and establishing these things with multiple witnesses.  One day we will be on His (Abba YHWH’s) time for certain.

All glory, honour, thanks and praise be to YHWH and to our King Yahushua!